Craft and Travel
Home art Utopian Design – A look back at the inaugural London Design...

Back in September Somerset House became a homage to contemporary design from 37 countries in a new annual exhibition called the London Design Biennale. The theme was Utopia By Design and each country was asked to depict what Utopia means to them.

Consisting of installations, artworks, protypes and experiences, visitors where able to interact with world-leading architects, designers, scientists, writers and artists.

I first came across the buzz of the event on social media. The exhibition, although lasted three weeks was part of London Design Week. This event stood out because of the ‘international appeal.’ The chance to visit 37 countries in one exhibition was too exciting an experience not to embark on, so I popped along on the last weekend to have a look at what it was all about.

Split across different, floors, wings and even outside the venue, it was a mammoth exhibition and a day (as I had also heard on the grapevine) wasn’t enough, but I took in as much as I could, and as well as discovering the fascinating backgrounds to each piece, I also took the opportunity to pose in the exhibitions -well, the backdrops were made for Instagramming!

From roaring digital fireplaces (Germany) to huge animal swing chairs (South Africa) and a giant gumball machine dispensing water (Saudi Arabia), there was plenty of imagery and objects to spark the imagination, and installations so striking they were instantly memorable.

I think I managed to get around to see all of them. Here were my favourites…

An installation entitled Daalaan, this was a huge room filled with beautifully printed textile hanging and wooden stools that spun round; sitting on them was a perfect break to all the walking around the exhibition entailed. Created by Karachi based Coalesce Design Studio, their interpretation was that Utopia is ‘a place where strangers become friends.’ Consisting of architecture, design, furniture and fabric screen prints made from henna dyes, it had a relaxing and welcoming feel and it was a pleasure to relax there, (as much as one can at a busy public exhibition!), and take it all in.

With its sci-fi spaceship theme, this was one of the most fun exhibits. The literature accompanying the exhibition was fascinating and told of an agreement assigned by 29 countries in 1955 to create a satellite. It consisted of a floating satellite surrounded by interesting dome like structures.

A ‘wish machine’ – with a name like that, this was already going to be one of my favourites! A cultural tradition deeply rooted in the ancient Anatolian faith and found in ancient Greek, Kabala and Persian beliefs, Wish Machines operates on a simple mechanism that involves affixing a note or a memento to a branch of a tree as an act of hope.

The Spanish offering consisted of a tube you walk through with distorted mirrors at the end that symbolised a ‘utopic next century city’, a habitat where technology, life standards and health coexist, even when natural resources are scarce.

It’s a scary thought that this is an actual reality: we will have to face such times. 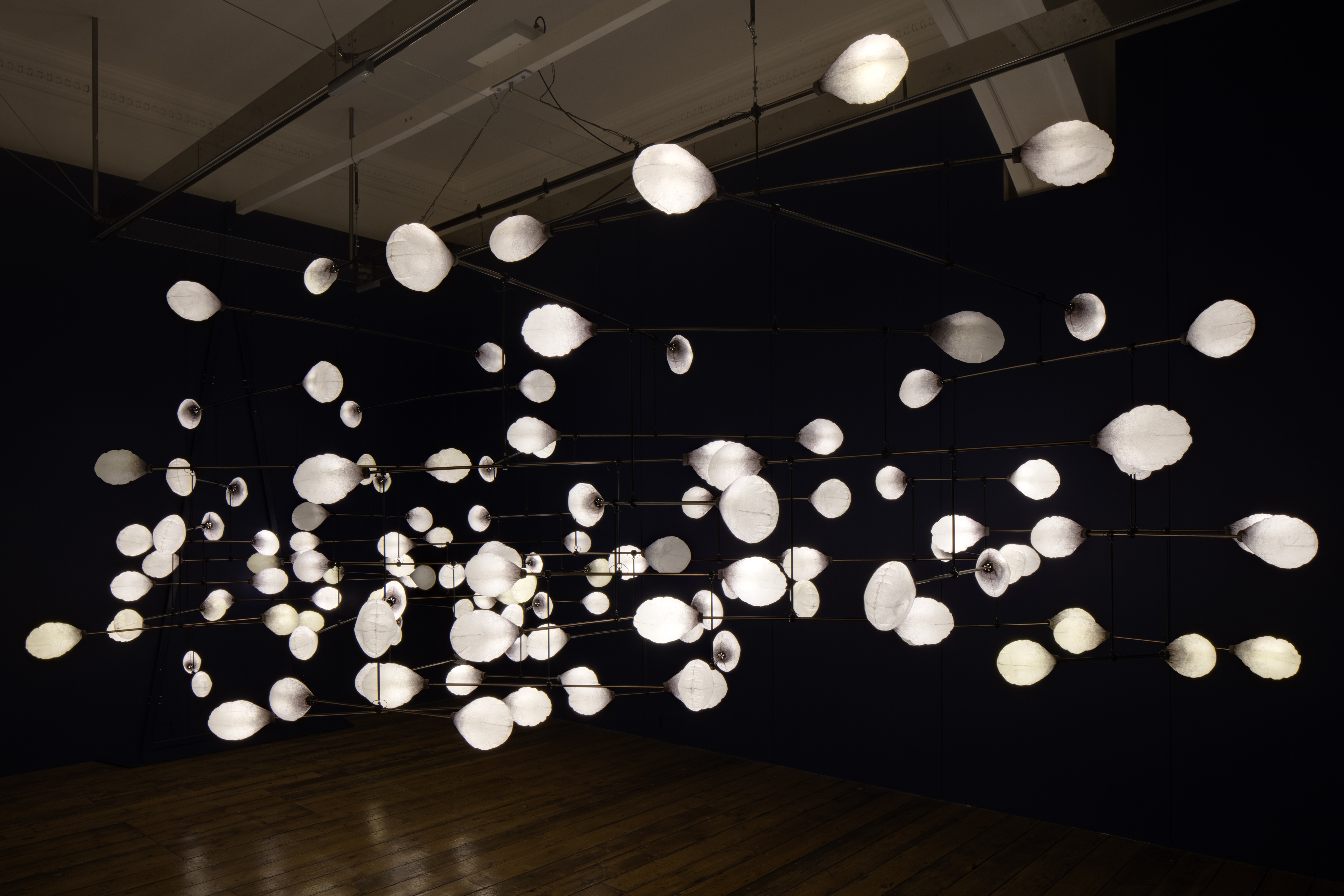 I get over excited whenever I see lights so this kinetic light installation had instant appeal. The theory on the other hand of why it lit up was one of the more complicated of the entire exhibition.

I’m not going to try to explain it because in truth it went ovr my head in a too-academic-for-a-public-exhibition-kind-of-way, but aesthetically speaking I had much appreciation for it.

A real-life miniature city was set up for this alfresco exhibition where artist Annabel Karim Kasser recreated a bustling street scene from Beirut including a wet shave bar, falafel hut and juice bar. Attention to detail was everything and the falafel, which was on sale, tasted great!

The India space Chakra View was one of the major commissions and took up an entire wing. Weaving together India’s cultural heritage it used traditional textiles and ancient mythology, with modern design innovations to portray a sense of modern India. Colourful creative and a complete experience, stepping into the main space was a joy from every angle it was viewed from.

CraftandTravel’s Editor posing by the installation

Alongside the exhibition there was a number of talks at The London Design Biennale and I attended one chaired by Priya Paul, Chairperson of The Park Hotels in India. I was keen to go because I stayed at their Kolkata hotel in 2014 and loved every minute of my stay. Cool design was present in every aspect of the hotel and it remains one of the most memorable places I’ve ever stayed in. Priya chaired a discussion about contemporary design in India and in particular, the role Indian crafters and artisans play in it.

Priya is an avid supporter of art and crafts and invited respected figures from the Indian design world to give their thoughts on the subject, including Rajshree Pathy, Founder of India Design Forum who created the colourful Chakra View installation.

A common theme in their discussion was around how businesses (such as hotels) can incorporate the work of artisans and crafters to help preserve their heritage which I thought was a positive approach. Certainly design-led hotels, rather than chains which look the same, can have unique, one, off and hand-crafted pieces as part of their décor, though of course it was be amazing if bigger chains could also see the value it would have.

The discussion began with some observations by Author Sunil Khilnani who explained that design has been important in India for 60 years – in 1958 the India Report was the blueprint for the national institute of design who were committed to contemporary design being part of India’s heritage.

He commented how Gandhi was an anti-industrialist because he didn’t like how mass produced goods could mean the loss of handicrafts. Bringing the conversation up-to-date,  Researcher Alice Ciccolini described her own experiences of the jewellery industry where the children of mastercrafters do not want to work in the industry, so work is being done to encourage them to see the benefits.

One issue is that middle-class wealthy Indians are going to art school and becoming artists but the lower paid artisans and crafters who are poor, cannot see the value in what they are doing, so this gap between how art and craft is perceived needs to be changed.

Practicality wise the mobile phone has been beneficial to crafts people as they can now cut out the middle-man and take orders directly. Priya also referenced the resurgence there has been in the weaving industry and how wealthy Indians appreciate owning hand crafted pieces as a form of patronage.

A fascinating conversation which informed my visit to the exhibition, it made me realise how important the ‘talks’ that are programmed alongside exhibitions are; I’ll certainly be looking at attending more of them for future exhibitions I visit.

For more information about the exhibition visit www.londondesignbiennale.com

Is this London’s most colourful bicycle? How I pimped my wheels

Happy New Week! Here are some ways you can harness

Opening Night of @loveliff the #filmfestival I wor

Tomorrow is #CleanAirDay. Join us at lunchtime to

Introducing the coolest & most colourful van in th

The Shapla or Water Lily is the national flower of

☀️I’m all set for picnic season - how about

The ☀️ Pavilion is working! This 🌈 masterp

📣Newsflash📣 I’ve been appointed the offici

🙋🏽‍♀️Hands up if you’re inbox is fil

Tea makes everything better. But did you know that

It feels so good to eat out again. To celebrate I

A cool riverside café in Barking that even Instagrammers haven’t discovered...